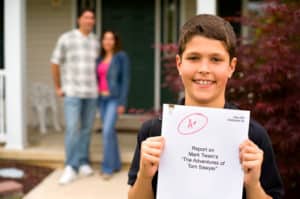 When your kid gets a “A” in class, it’s not that special anymore. In fact it’s A LOT more common than it used to be.  And that’s not because they are better students–it’s because the teachers are less discerning.

WTOP’s Shawn and Hillary spoke with Ann Dolin, President of Educational Connections Tutoring, about the problem with grade inflation.

Click below to listen or if you prefer, read the transcript that follows the recording.

What is grade inflation?

Grade inflation is the tendency for teachers to give higher academic grades when the same exact work would have earned lower grades in the past. Now, an A is the most awarded grade in high school and in college. In fact, receiving an A is three times more common now than in 1960. The number of Bs and Cs has decreased making room for a lot more As. Although it’s interesting, the number of Ds and Fs given has remained about the same.

Why is this occurring?

In high school, teachers realize that getting into a good college is more competitive than ever, so many report they don’t want to decrease their students’ chances of a scholarship or acceptance.

But we’re also seeing that the average SAT and ACT test score for admitted college students has increased. So students are more capable, and some argue that that’s why grades are higher – more prepared kids equal higher grades.

But college is also incredibly expensive. Students not only want to do well, but they want to get their money’s worth. So they tend to take classes where they’re more likely to get an A. With websites like Rate My Teacher and Rate My Professor, students can post a rating and a review of their teachers. So often, when college students are in the process of course selection, they’ll look at these ratings. And one of the top reasons students chose professors is based on their tendency to give high marks.

What’s the downside to grade inflation?

First, when you’re a top student, it’s hard to stand out. A couple of years ago, I asked a local guidance counselor at a top performing public high school in Fairfax County about the issue of grade inflation. He said that at his school’s graduation, they stopped reading the names of the kids with a 4.0 GPA because over 25% of the graduating class had a 4.0 GPA or higher.

And a recent study published in the Journal of Economics of Education Review found that when it comes to college, students are actually taking easier classes, typically in the Humanities area, because these courses statistically yield higher grades, and they’re avoiding classes that yield lower grades, such as those in math, physics, and engineering.

Marla Merrill
22:41 08 Jan 21
We used Educational Connections for ACT prep for my 11th grader. Jon, her tutor, was knowledgeable, kind, and... motivating. Even though my daughter wasn’t thrilled with the idea of prepping early in her junior year, she grew to enjoy her sessions with Jon very quickly. After 12 weeks of weekly tutoring, my daughter was able to raise her score 9 points from her pre-prep test! We couldn’t be more thrilled! Thank you EC Tutoring and Jon!read more